The moment we have been dreading for years is nearly here. On 1st February Esso will begin clearing their working area in Queen Elizabeth Park, destroying hundreds of trees in the process.

Esso’s widely publicised total of 30 trees only includes those with a trunk diameter of 75mm or more. They will remove hundreds of trees which are smaller than this.

A 10 metre wide strip running along almost the entire length of the south path will be cleared of rhododendrons, shrubs and all other plants, leaving only trees with a trunk diameter of 75mm or more. We estimate that there are hundreds of young trees and saplings with trunks smaller than 75mm which will be removed during the next few weeks and there is nothing that can be done to stop this. These are the trees which would have grown to fill the spaces as older trees die. Because of Esso, the future tree cover in the park will be thinner and less extensive than before.

Esso will clear an area 10 metres wide by 4 metres tall along the southern path.

The destruction doesn’t stop there. Trees within the 10 metre strip will have their lower branches lopped to create at least 4 metres of headroom for Esso’s machinery. Just one single tree is safe from lopping: the Fairy Tree. There are other trees which we have asked Esso not to lop but they have refused.

Trees will be felled

After the smaller trees have been cleared, 30 trees with trunks larger than 75mm will be felled — these have already been sprayed with red dots so that the workers can identify them.

Many of the choices of which trees to fell and which ones to keep make no sense.

We asked representatives from Esso to explain why specific trees were selected for felling and they did not know the answer. Let’s have a look at some examples. 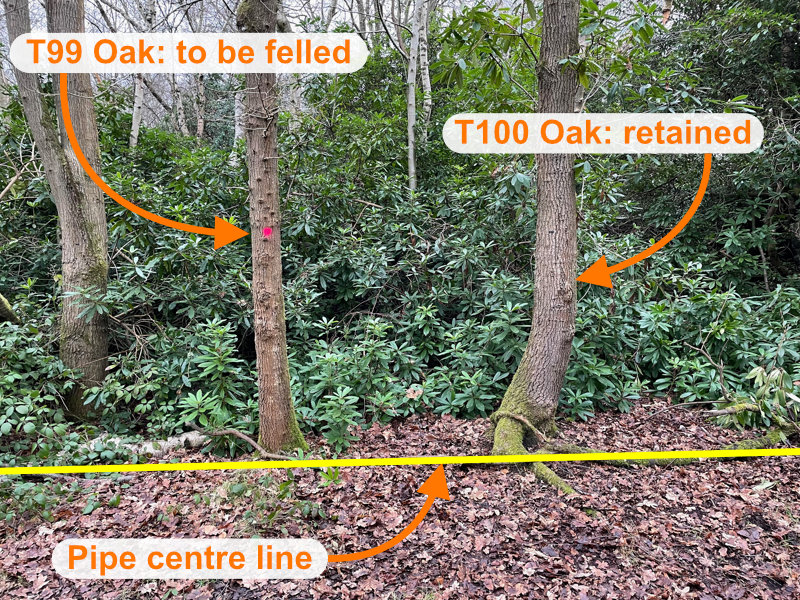 T99 and T100 are oak trees by the path near the Cabrol Road end of the park. T99, on the left, will be felled whilst T100, on the right, will be retained. The centreline of the pipeline runs close to the trunks of both of these trees.

We asked Esso’s representatives why one of these trees will be felled and the other will be retained, when the pipeline is about the same distance from each of them and they could not give a reason. We asked how T100 would be protected (because they must not damage any of the trees they retain) and we were told that when the pipe is installed, the area around the tree would be dug out by hand. There was no explanation why this can’t be done for T99 as well.

A little further along the path is a clump of trees which is going to be very difficult for Esso to get right. Their mapping of this area is questionable and the individual trees are very difficult to identify precisely. Esso only have permission to fell some of these trees and if they remove the wrong ones they will be in a lot of trouble. 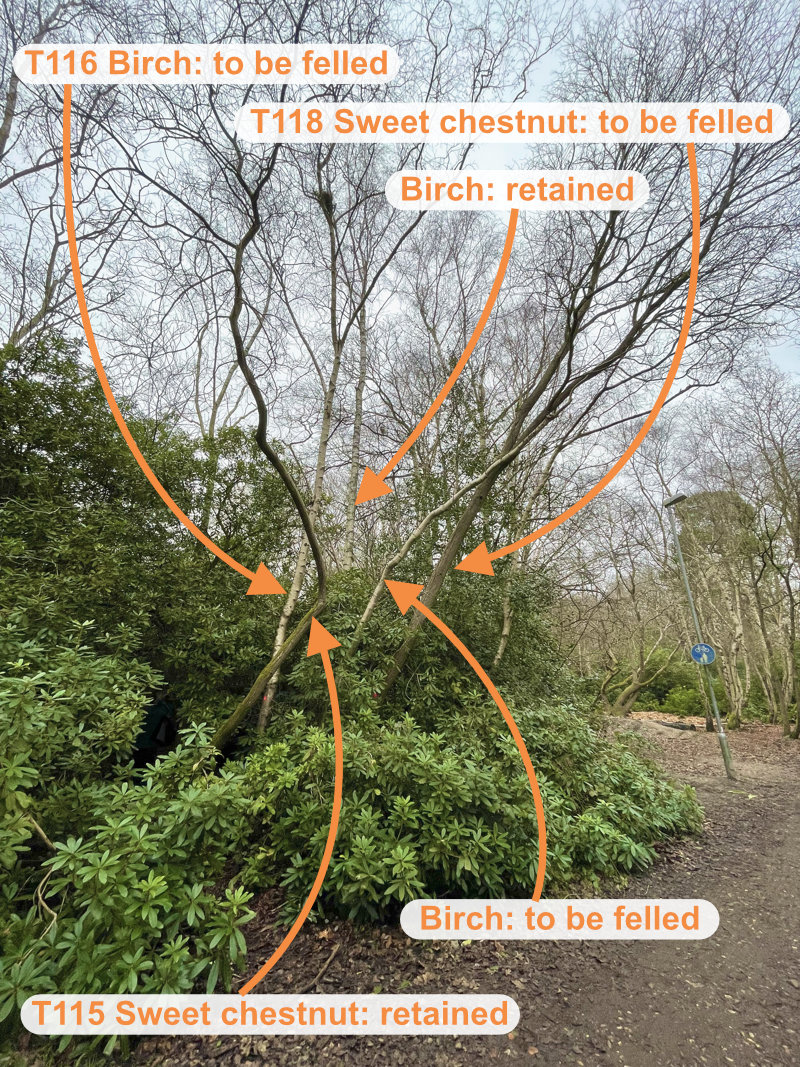 The sweet chustnut identified as T115 will be problematic for Esso because they are not allowed to remove it. However it overhangs their working area much more than the neighbouring trees, some of which they will remove. If Esso lop this tree at a height of 4 metres, they will remove the entire crown and kill the tree. So what are they going to do? We asked them and they haven’t got a clue!

Let’s have a closer look at the base of T118, which is a sweet chestnut they will remove. Its base is intertwined with a birch tree which is not marked for removal and therefore must be kept unharmed. The plans which Esso have shared do not allow us to identify the number of this one precisely. 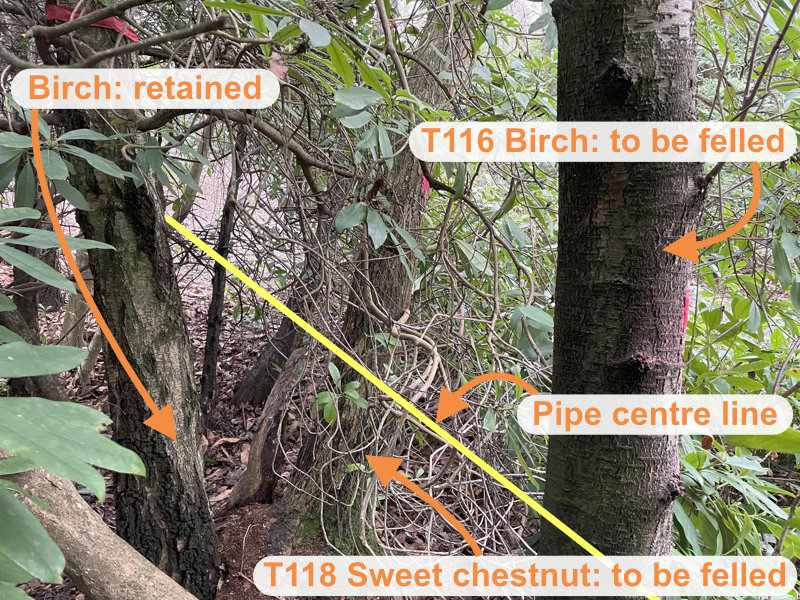 Needless to say, we will be keeping a very close eye on this area to ensure that Esso have properly identified each and every tree before they remove any of them.

Where the path curves away from the railway line, Esso have marked T222, a sycamore, for felling. 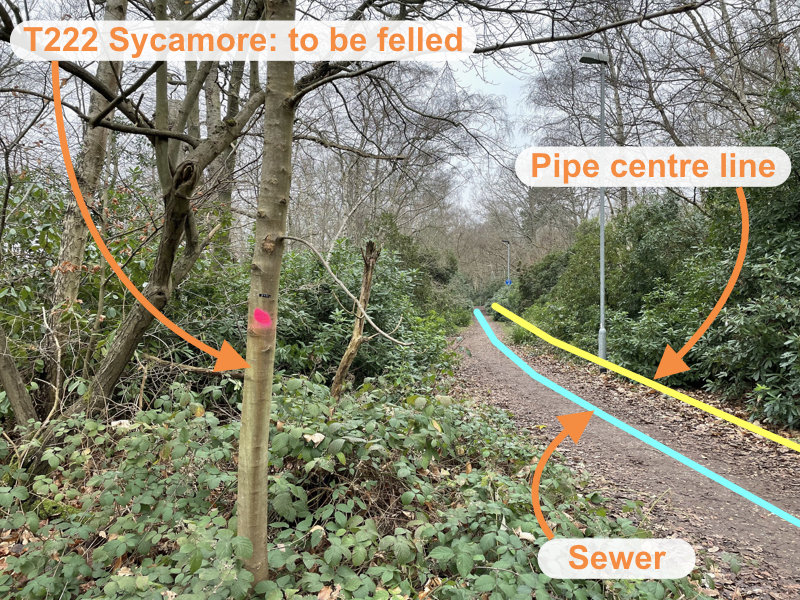 T222 is several metres away from where the pipeline will be installed. The existing sewer separates the new pipeline from the tree so there is no reason for Esso to be digging or working anywhere near it, yet it is still marked for removal. We asked their representatives why this is and they were equally baffled. At first they suggested that it was in the path of the pipeline trench, showing that even within a week of their clearance works starting, they are still not sufficiently familiar with the site.

Esso’s lack of knowledge at this stage is inexcusable.

One of the most endangered trees in the park is a large beech, a veteran tree, which was severely and excessively crown reduced by Rushmoor Borough Council a few years ago. The tree is just about managing to cling to life, with only a few branches still alive and bearing leaves. 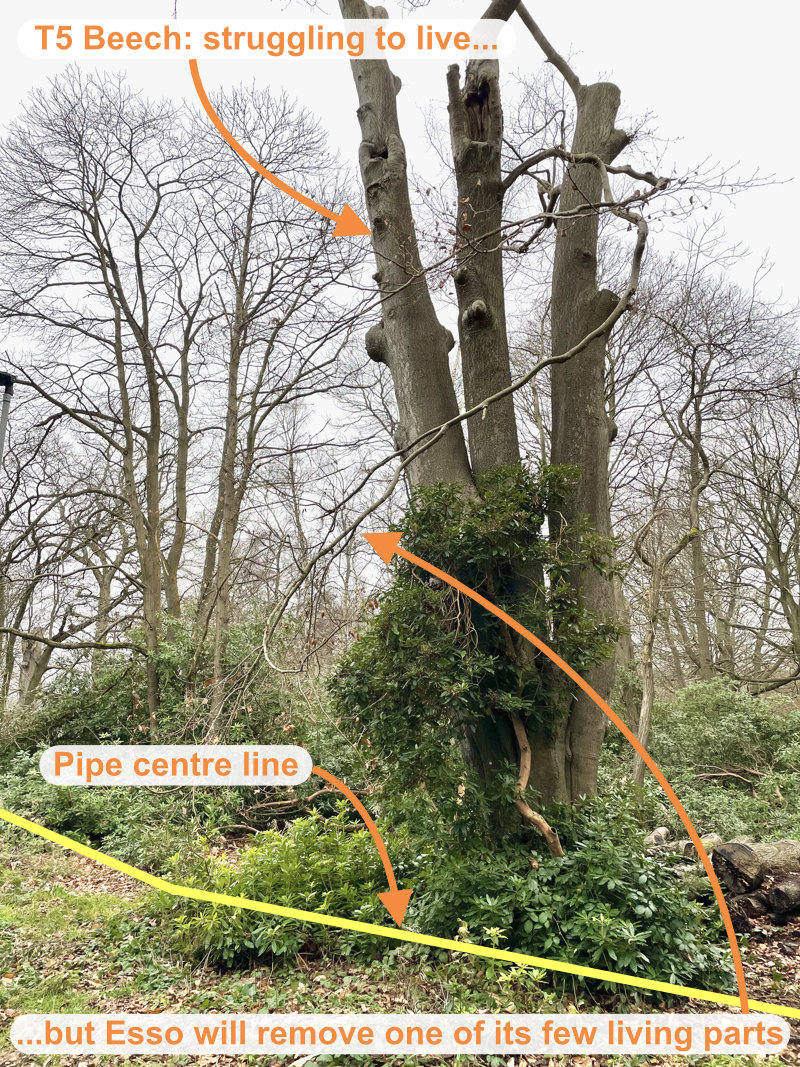 There is still a chance that this tree can recover but Esso are not willing to give it a chance. The pipeline will run between the path and the tree - and Esso are going to lop one of the few living branches which extends into their 4 metre high area. We do not know whether it would be better for the tree to keep this branch, or remove it to promote growth higher up. Esso’s representatives said they were not willing to take this into account and it would be lopped anyway. This is classified as a veteran tree and should be treated with more care.

Another of the park’s veteran trees, the Fairy Tree is reasonably safe from harm during the early stages of the works. The area around it is fairly clear and no branches will be removed from it. Esso are still working out how to install the pipeline underneath it but it has emerged that there are a number of options including drilling underneath the tree to avoid digging a trench through its roots. If this is an option for the Fairy Tree, it is not clear why they will not do this in other areas of the park.

Moving on from the Fairy Tree, the main feature of Esso’s works in February will be clearing rhododendron. This area contains a few trees marked for removal, such as T362, a birch, shown below. 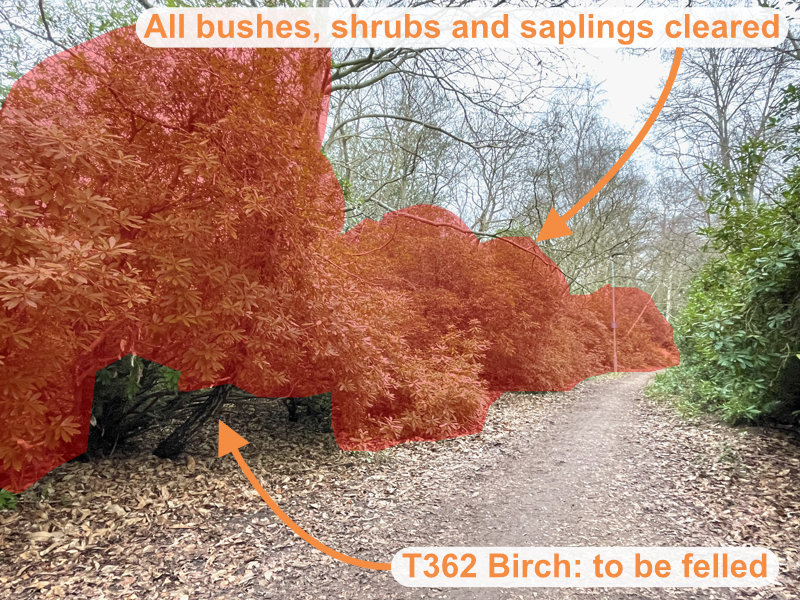 Although T362 is reasonably well separated from its neighbouring trees, there are more examples along this stretch of path where trees marked to be felled are very close to retained trees which overhang the working area to a greater extent.

Any claims that the trees have been carefully selected are nonsense. Their workers have had great difficulty in precisely identifying the trees which Esso have permission to remove so there is a definite risk that errors will be made.