Over 250 visitors enjoyed our celebrations during The Queen’s Platinum Jubilee bank holiday weekend.

Events kicked off on Thursday night with a torchlight procession around the park. Walkers lit the paths with their own homemade lamps while others carried torches to light their way. Trees were also adorned with specially written haikus which created an enchanting atmosphere. After the procession, residents were treated to a late feast of Jubilee-themed homemade buns. “I enjoyed the Royal Torchlight Procession which made a magical string of lights through the trees,” said Sue Runciman, Walk Leader. “It really makes me value the park. We are so lucky to have it.”

On Friday, a Jubilee Nature Trail saw adults and children hunting for clues among the trees. There was also a special visitor as Rushmoor’s Mayor, Councillor John Marsh, planted an oak sapling to complete the addition of 70 new trees to the park as part of the Queen’s Green Canopy initiative. Friends of Queen Elizabeth Park’s own working party group had previously planted 69 trees prior to the Mayor’s visit. After planting the 70th tree the Mayor unveiled a plaque to mark the occasion and thanked Friends of Queen Elizabeth Park for looking after the trees for future generations. 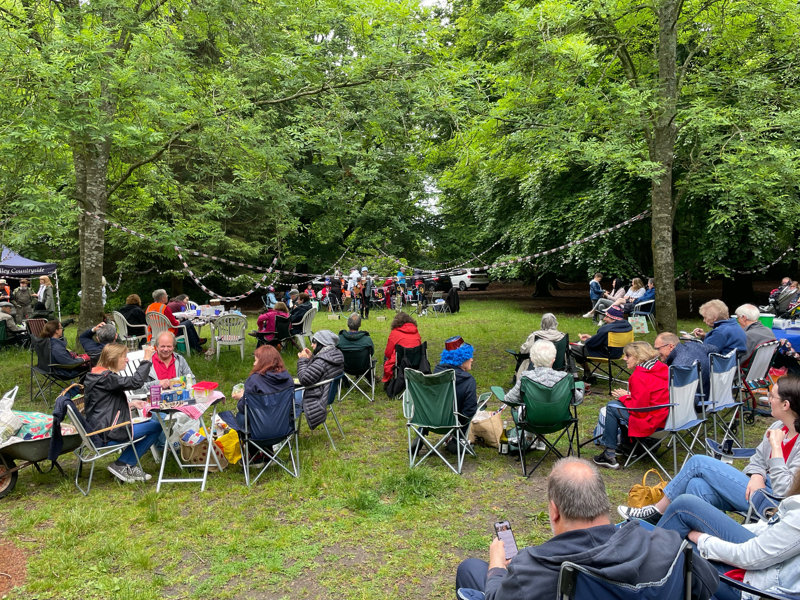 On Sunday, the park welcomed Farnborough residents to a Big Jubilee Picnic Lunch. Trees were decorated with jubilee paperchains and a schedule of musical entertainment ensured everyone had a lot of fun. Cactus Brass, a local band played a programme of crowd-pleasing songs, followed by the very talented singer-songwriter and guitar player, Yaz Dale, who performed her own songs as well as a medley of much-loved hits. The U3A’s ukulele band also delighted picnickers by taking them on a whimsical and delightful musical journey through the decades of The Queen’s reign.

There was an unexpected but much-welcomed addition from the local Nepalese community whose members brought along a crate of traditional Nepalese food and invited everyone to tuck in. A long queue was quickly formed as everyone was keen to sample the delights.

“The Queen wanted her Platinum Jubilee celebrations to focus on togetherness and I think we certainly achieved that as well as having a long weekend of fun,” said Kathryn Stuart, Chair, Friends of Queen Elizabeth Park. “I’d like to thank everyone who came along and also everyone who has supported us since we took up the role of park guardians.”

“Everyone had a superb time at the Big Lunch and it was glorious to hear the lovely music in the park,” said Kath Parish, a local resident. “It was great to see so many people singing along.”